Home / Get Fit / Are you Rude? Unspoken Gym Etiquette Rules you Need to Follow 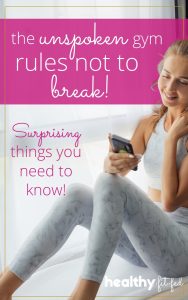 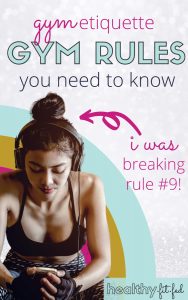 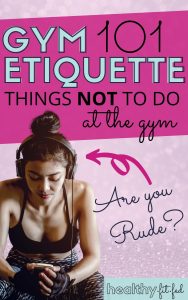 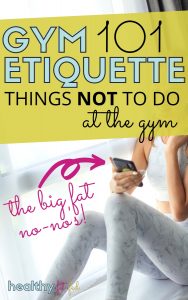 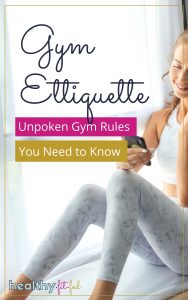 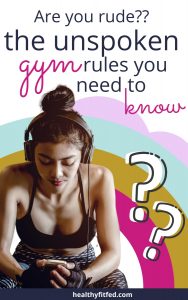 Many people look forward to that golden hour of the day where they get to let go of all their worries and do something just for them.

It’s a special time of day, where they get to be in the zone left only to their own thoughts while they feel the burn.

That is, until the guy next to them commits a violation of the unspoken “gym code.”

If you don’t know what the “gym code” is, it’s basically common sense. Do unto others kinda thing. Basically, don’t commit these gym faux pas:

The Biggest No-No’s of Gym Etiquette

Here are a few of the biggest no-no’s we see other gym members make, but should totally stop!

#1. Not Cleaning up Your Sweat

When you’re at the gym, you need to clean up after yourself when you are done using the equipment.

Many gyms have “wipe stations” which are just mounted bottles of disinfecting wipes.

I typically just bring my own small personal towel, as I’m not a big sweater.

Always wipe up any sweat. No one wants to sit on a wet machine….

Also, it may not seem as important, but if you sweat onto the floor, you should be cleaning that up too.

#2. Sharing Your Music for Everyone to Hear

I’m sure your music is great and totally motivating.

But not everyone wants to listen to that killer workout playlist you made.

Just wear headphones. If you forgot them, then forgo the music.

I always keep a few basic pairs of earbuds in my gym bag just in case.

Mostly, I’m talking about the grunting and other awkward noises.

Things get can pretty intense and uncomfortable for those sitting near the “grunter.”

It’s okay to make some noise while you lift, but please be mindful of just how loud (or aggressive) you’re being.

This one sounds innocent enough. But let me tell you a little story.

In my younger days at the community rec center I was minding my own business doing some calf raises, and the guy next to me, also doing calf raises breaks out into song.

I’m not talking about singing a little diddy to himself. No.

This man was singing at the top of his lungs. It was so awkward, I just couldn’t.

I had to get up and go to the opposite side of the gym. So long strength training day.

No need to stare, at anyone. Ever.

Even if they aren’t looking back at you, they notice.

They are just being polite and minding their own buisness, and you should too.

#6 Using Your Phone on Equipment

Don’t you love waiting for your turn to do leg lifts while the occupier scrolls endlessly through Facebook all while not actually moving? Yea, me neither.

If your sitting on equipment, make sure you’re using it.

It may be tempting to pull out your phone while you rest in between sets, but it’s just rude.

It’s ok to do your reps, but be mindful of those waiting to use the equipment too.

If you are on one machine, cool! Keep on doing what you’re doing until you are done.

What’s not ok is using this machine, with your towel on that machine and thinking you’re using all the equipment at once.

If you are chatting someone up, and they genuinely seem interested it’s ok to ask them out, but for the most part keep the flirting to a minimum.

And just because someone politely nods and smiles, doesn’t mean it’s an invitation to come over and chat them up endlessly.

Look at body clues. If the person looks uncomfortable, it’s not because they are playing hard to get.

It’s your cue to leave.

#9 Using your Phone in the Locker Room

I’ll admit, this is something I’ve done in the past without realizing how rude it is!

In the age where your phone is also your camera, it’s best not to make anyone wonder about your intentions.

Do what you need to do in the locker room and get out.

Not a place to sit and check your emails. Someone could get the wrong idea.

Previous Post: « The 10 Best Superfoods To Eat On A Low Carb High Fat Diet
Next Post: How to stay warm when working out in Winter »

Hey! It is nice to meet you!